Share your fembot fiction and fantasies here or discuss the craft of writing by asking for or giving suggestions.
Post Reply
19 posts • Page 1 of 1

Hello everyone! It's literally been years since I've posted any of my own content so please allow myself to reintroduce... myself LOL. As most of you probably don’t know, I wrote a couple of stories back in the very early 2000’s called “TGIF” (Friday on here) & “Monday”. At the time, I envisioned myself creating a whole series of stories with interconnected plots and characters. However, very soon after writing these two stories, I soon found myself very busy with starting a family, career, life and I quickly found that I had no free time to sit and work on stories anymore and everything pretty much went to the wayside. Today, I really still don’t have the time (or maybe actually the patience LOL) to work on a full story or stories. However, after years of taking from the community, I really wish to contribute and give back in a small way.
I became re-inspired by the Fembot Central story snippets- the short stories under 150 words. I’ve also always liked the manipulations that had a short story to go with the picture as well. At this point I’m going to contribute “micro-stories” accompanied by a picture. When I did write full stories, I firmly believed in being very descriptive and providing attention to detail- especially when It came to the fembot character(her look, hair, clothing, nails, makeup, etc.). I just feel it’s very important to the reader to have a clear mental picture of the story, however, this attention to detail is extremely time consuming (for me anyway). These pictures will help me to alleviate all of that and allow me to get right into the micro story. My only issue is where to post them. They are indeed images but meant to be stories- even if they are extremely short. This will also be the longest that I write on here again -having the pictures saves me so much time. It’s actually easy for me to mindlessly look for pictures at work in between tasks and writing is easy to me. And although they are images, they aren’t particularly meant as manipulations either. However, they may actually be “worded manipulations”- pictures manipulated by words. Perspectives can easily be changed in pictures just by using words!
Just a bit of my background- as far as fembots go, my biggest influences are Westworld (the movie- definitely not the tv show), Futureworld 1976, Beyond Westworld (the scene with Jan is the first robot I remember seeing), Cherry 2000, the Kill Oscar & Fembots in Vegas episodes (the 2nd robots I remember watching), the Stepford Wives (particularly the malfunctions, also their programmed mannerisms and their looks) and also more recently, Real Humans (the Swedish version) and maybe a small touch of the Sarah Connor chronicles ( I do like the idea of a terminatrix but not the flesh part. "My robots" will be all artificial). You can also say that the above mentioned are some of my “specialties”. So with all this said, I find the thought of actual female robots secretly existing among us (such as the Fembots in Vegas) to be particularly thrilling (versus “store bought” robots or amusement park robots that you already know are robots but I also like the idea of them being repaired behind the scenes at night in secret- a la Westworld & Futureworld). The secret robot concept will probably make up many of the stories. I guess what I’m trying to say is that if you are familiar with the above then my micro stories will have a familiar concept. So, before I begin, I just want to introduce a couple of recurring “rules” in “my World”.
“Rule” 1: if there is a plot involving a human woman being replaced with a robot, keep in the back of your mind that the human woman is always kept happy, in total luxury & completely accommodated, unharmed, with no fear of being hurt and knowing she will be rescued soon. No human woman is ever killed to be replaced- I don’t like that concept at all and I don't want readers to have that question lingering. “Rule” 2: Since many of my influences are older, some of the technology may not be up to date. Example: calling a fembot on the phone to give further instructions rather than doing it wirelessly or panels or faceplates, etc. Also, I have been a part of the community here for years and so have many others. So, I think its safe to say that we have all probably exhausted every lead as far as finding anymore 70s fembot action so, (with Corey Fantoccini giving me a great idea) I’ll also be using pics from the 70s and the very early 80s’ to create my own stories and worded manipulations. “Rule 3” These stories are not going to be connected but they may very be loosely interwoven. Don’t expect them to make any sense put together. You may see some of the same names ie: Dr. Franklin or Delos or something but that’s about it. “Rule 4” All stories and pictures are completely fictional and strictly intended for entertainment purposes only!!! And thats all for now!!! And without further ado, here are just a few samples of whats to come. Enjoy!!!
Last edited by Kano on Wed Mar 10, 2021 12:53 am, edited 2 times in total.
Top 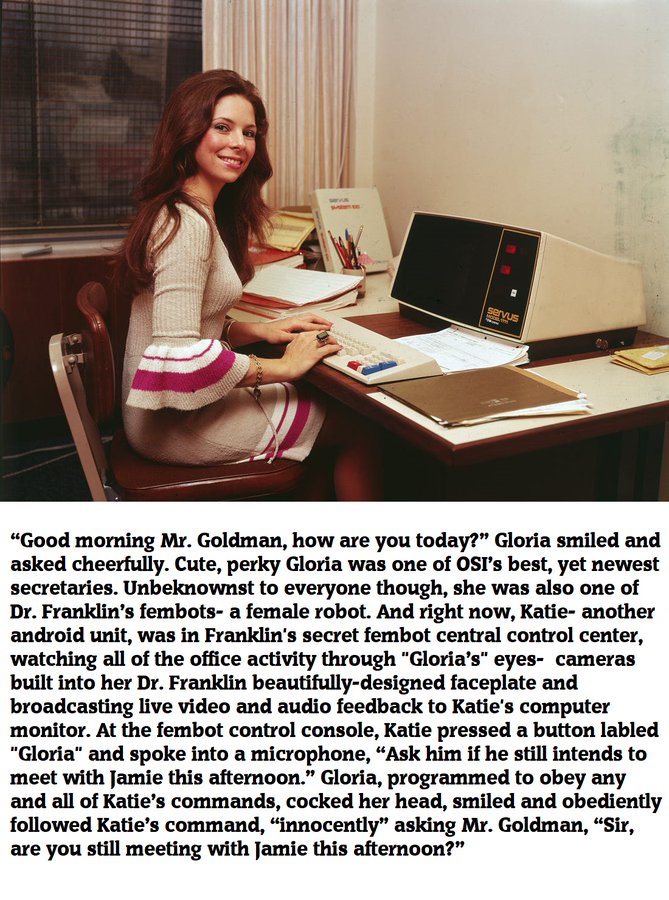 Redone as links above ...
May your deeds return to you tenfold,

I like these very much.
My formative years were the 70s and 80s too.
I've always liked the pic and brief story idea as well.
Can't wait to see more.
Top 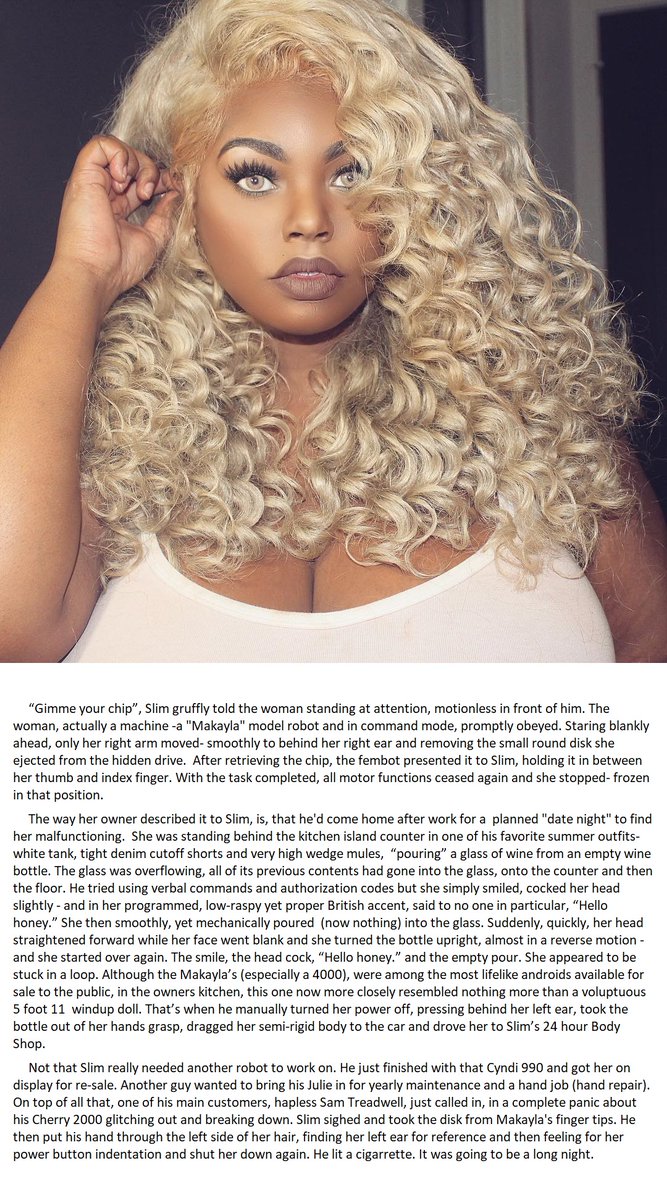 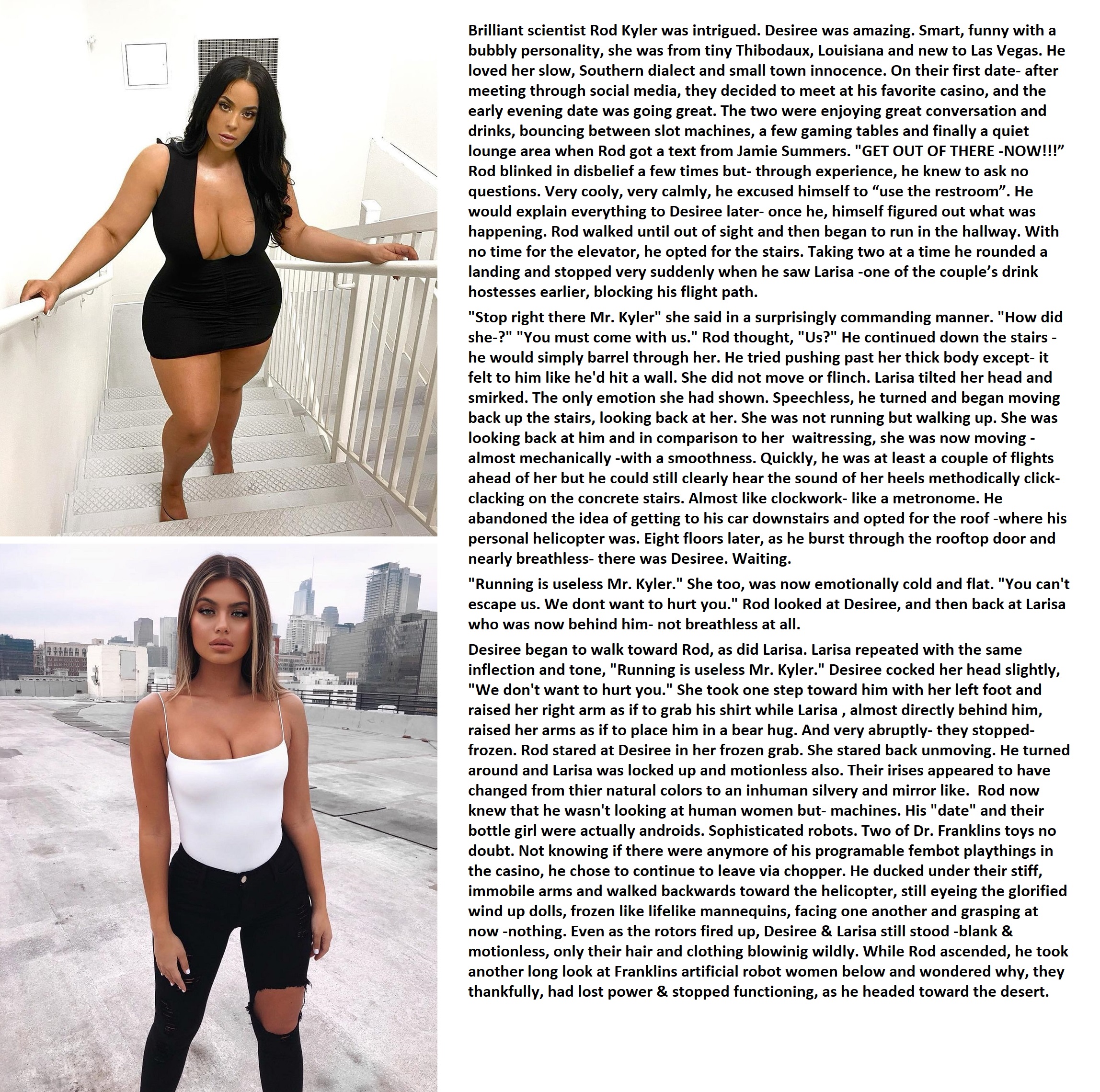 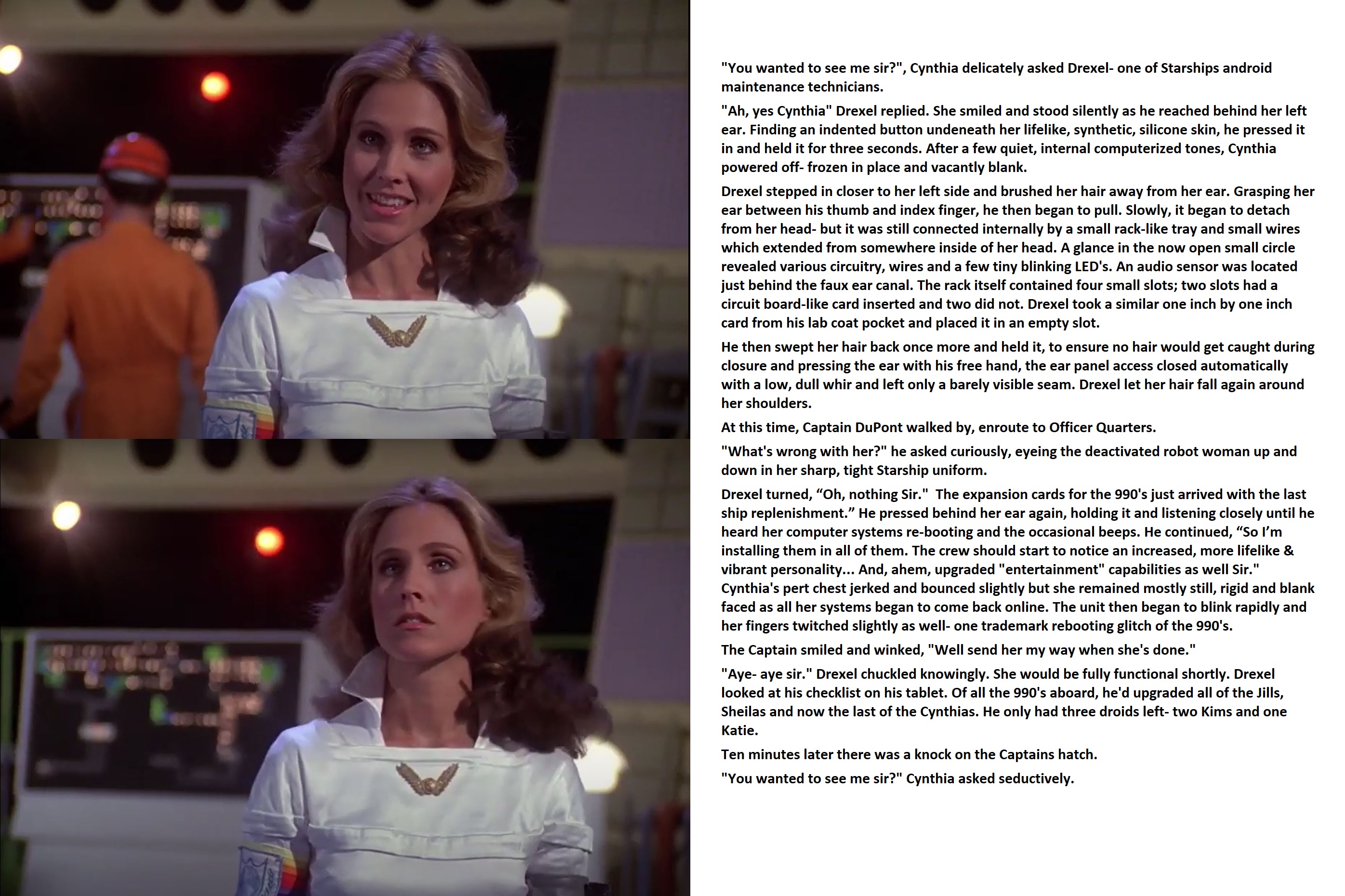 Ever thought of doing a short where Dr. Kyler used his own smarts to reprogram fembots to do his bidding?
Canadian lighthouse to U.S. warship approaching it: This is a lighthouse; your call.
Top 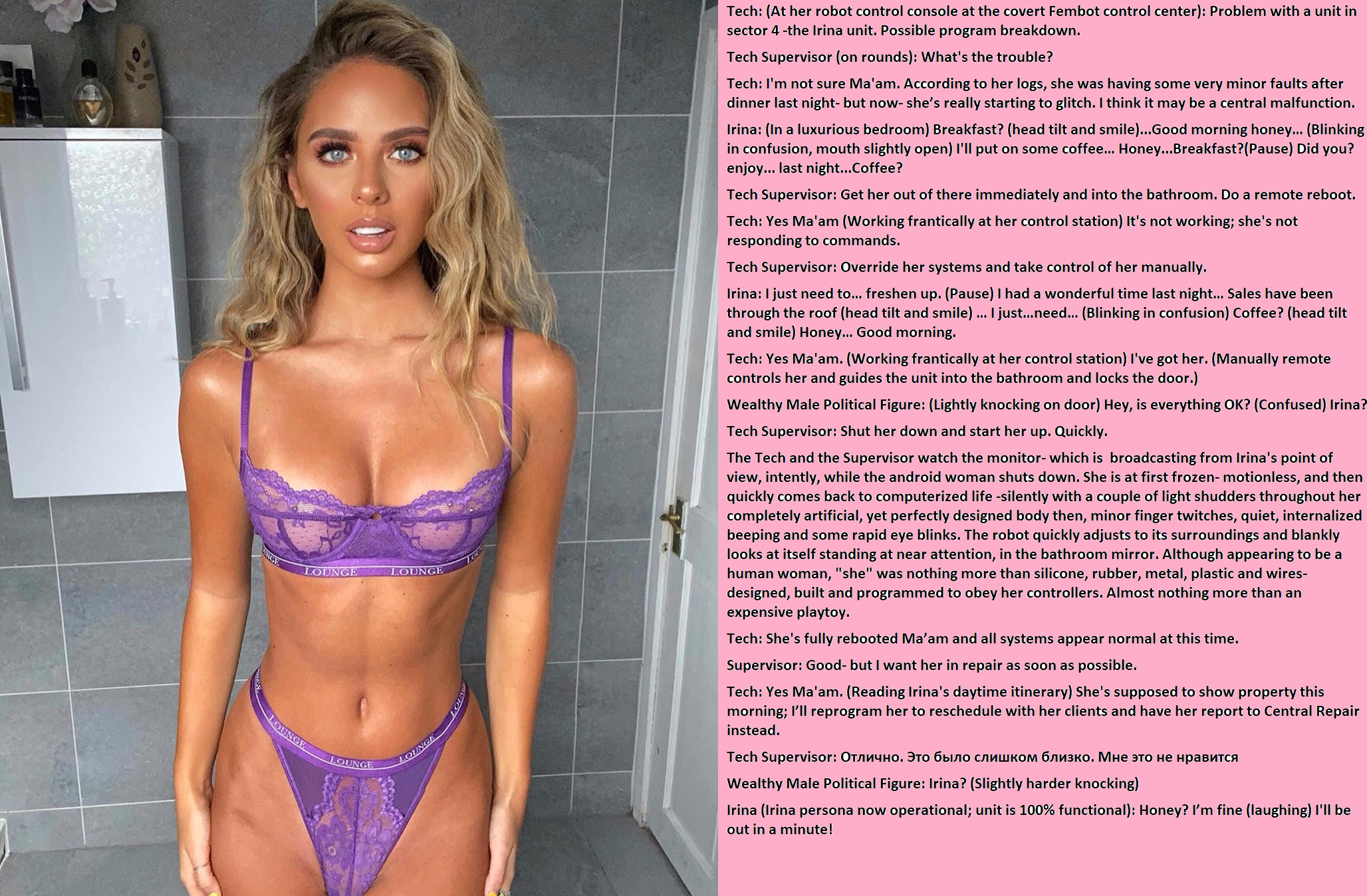 ^more of this please!
Cheers!
Top

Hello everyone, this story is based on the opening scene of the 1991 movie "Eve of Destruction." I watched this when I was younger and I always wished that this scene had been different for obvious reasons. Here is the link for reference https://www.youtube.com/watch?v=HICKZdV3Cxk&t=61s You can watch it either before or after the story! I wanted to give you guys the option because I do want the story to be a bit of a surprise as you read it even though you guys already know what it's going to be about LOL I added a little to it. And as always, to view larger, right click and open in new tab! 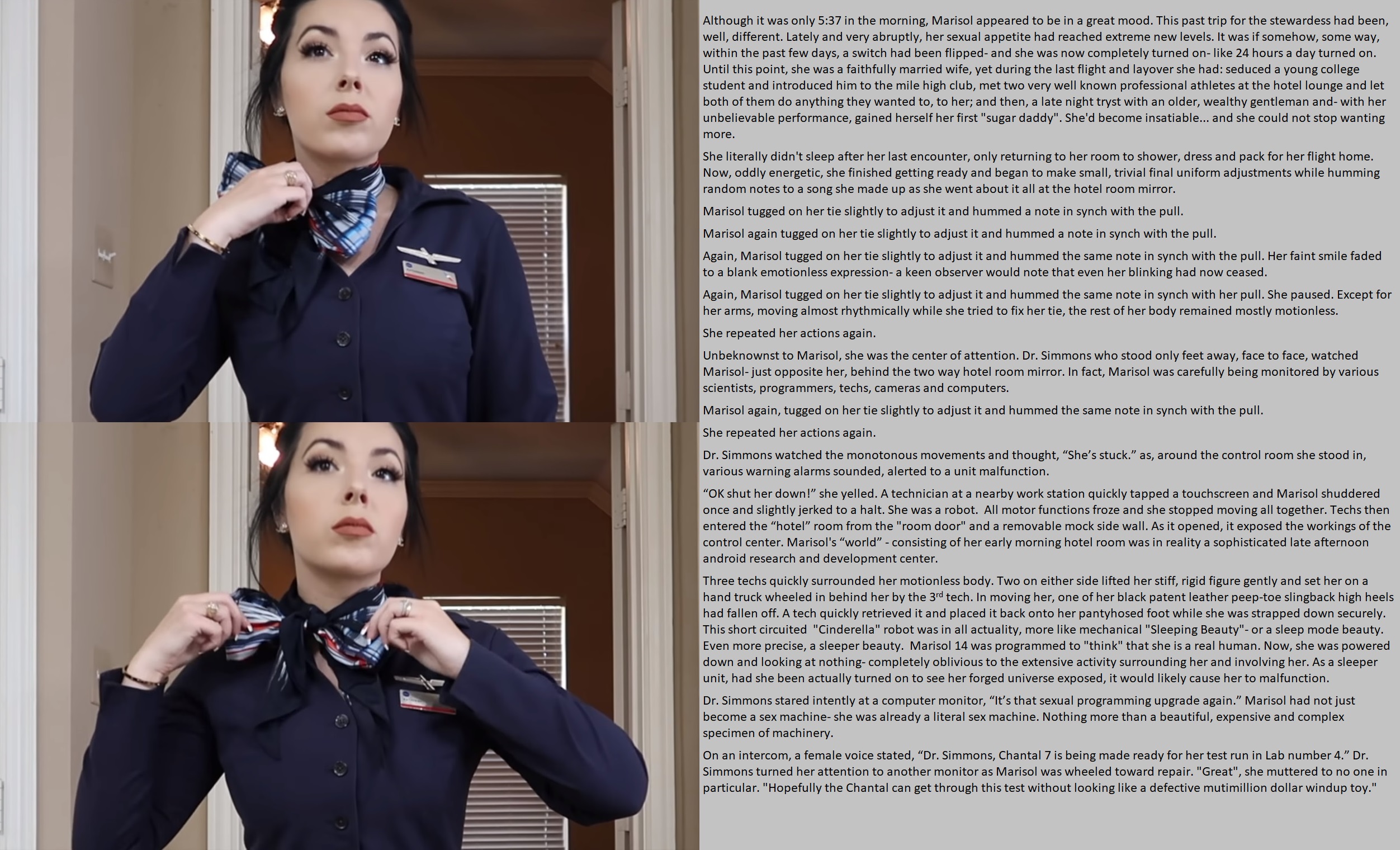 Do you post these stories on the wiki? The print for the last one was really small.
Canadian lighthouse to U.S. warship approaching it: This is a lighthouse; your call.
Top

I'll have to keep that in mind next time!
Top

That was much better.
Canadian lighthouse to U.S. warship approaching it: This is a lighthouse; your call.
Top

This story takes place in the present day and is my imagination(s) of how a continuation of the storyline involving the fembots from Bionic Woman and Six Million Dollar man might go! For larger pic, right click and open in new tab! 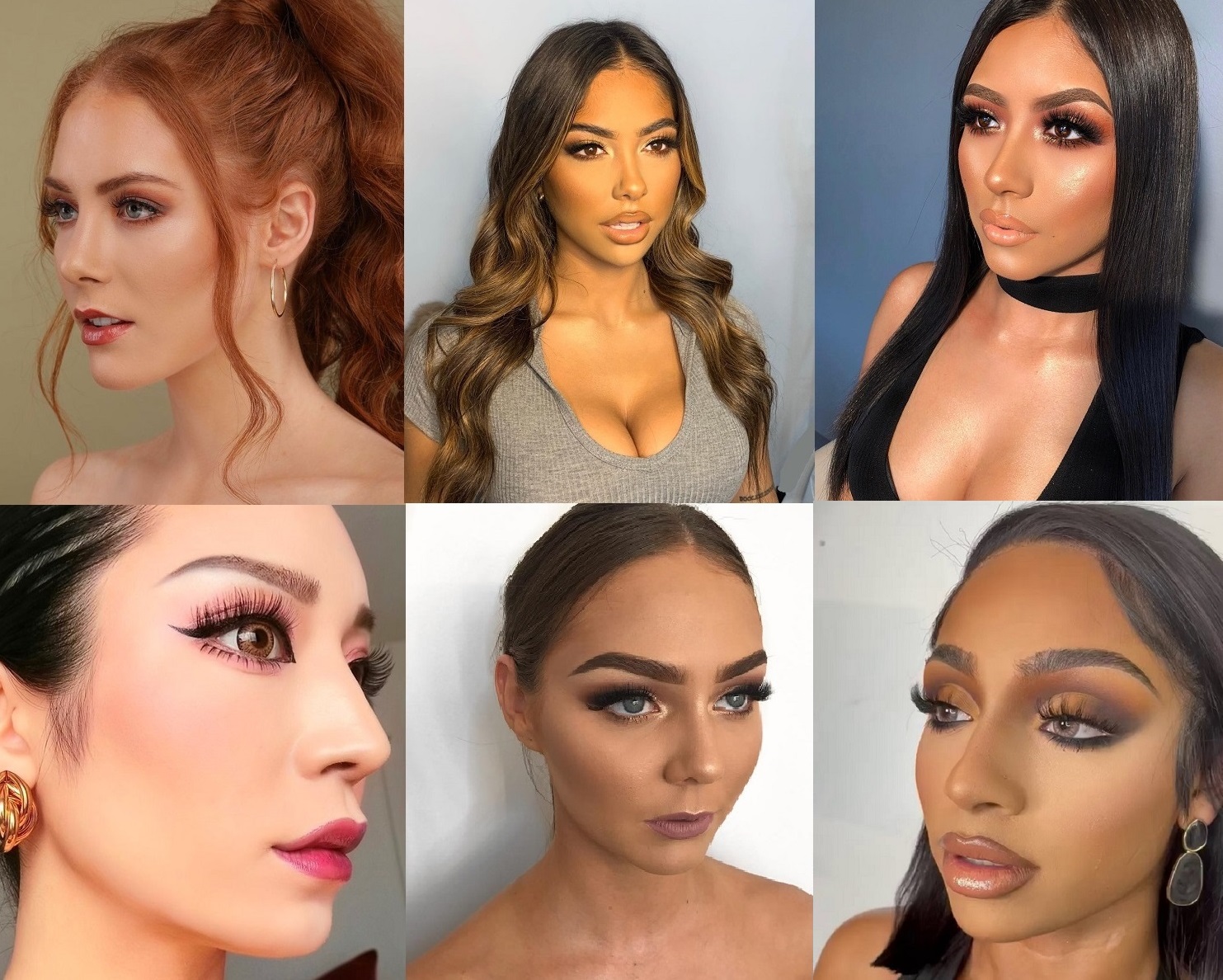 Simon Franklin walked slowly through the large laboratory like workroom in quiet gratification eyeing the bevy of beauties standing before him. Except for the low noise of small running fans from various computer equipment or the small beeps of the assorted, advanced electronics spread throughout, it was quiet. He walked by each of them surveying them smugly. As he reached the last of the women, he said out loud in a voice just above a whisper, “Finally.” None of the women responded – in any way. They stood fully inert, entirely oblivious to him- only gazing vacantly, standing suspended and motionless; like lifelike mannequins. The fact of the matter was that, they were not real women per se. Not human flesh and blood women but- mechanical silicone and electronics women. Robots. All of them presently powered off.
Unbeknownst to anyone, even OSI, the infamous Dr. Franklin fathered a son with a mistress in 1976- Simon. For obvious reasons, i.e. - being married, he wanted no one to know and even more so once he was arrested and imprisoned. Dr. Franklin and Simon’s mother did their best to involve Simon in Dr. Franklin’s life even while he was incarcerated, through coded letters in the mail and even visiting him. His mistress using counterfeit identification and Simon a false birth certificate. They would visit as much as possible all the way up until Dr. Franklin’s demise in federal prison. Now, also an egotistical narcissist, like his father, Simon blamed OSI for him not having his beloved father around growing up. (Not however, placing the blame on the many crimes that his father actually committed.) He burned with anger over not having him in his life throughout the years and only having vague prison visit memories from old Polaroids and letters. (Ironically, he had found very few news clippings over the years. OSI remained tight lipped about details of Franklins arrest with no mention of his female robots- fembots. They did not want the public in fear of a madman’s plot involving lifelike female androids secretly existing among us.)
On Simon’s 21st birthday, his mother gave him an old attaché case. It was from his father… The contents therein changed his life forever and also brought him closer to his father than he could ever imagine. In it, were all the schematics of his father’s 1970’s fembots, numerous 1000 gram gold bars, savings bonds, stock certificates transferred to Simon and land and property deeds in his name in various locations but mainly in the Las Vegas area.
Simon eventually dropped out of the prestigious technology University in the late 1990's and he slowly and meticulously began to build towards his family’s triple destiny- to finally avenge what he saw as his father’s untimely death at the hands of OSI, to continue the mission Dr. Franklin started in the 70s- and to do the job that his "brother" failed to do.
He was patient and, at long last, phase one was finally complete. After years of planning, designing, constructing, programming and, ahem, testing his first wave of robots, he was finally ready to unleash his (and his fathers) 21st century fembots. This time around, with the advantage of modern technology, he would have even more original units or duplicates available faster and even more varied than Dr. Franklin was able to. His mechanical honeys will come in all shapes, sizes and colors. But, just like his father, his automated ladies are also all programmable, obedient, and as beautiful or as deadly as he chose to make them. Simon’s army of robot women were under his complete control and ready for deployment whenever & wherever he needed them. Anywhere from a maid or secretary to a businesswoman or CEO; from a one night stand or stripper to a college student or professor. Whatever role needed to be played to fulfill his objectives.
He stopped and faced a motionless robotic red head. “Katie” was his oldest unit and his subservient assistant. He smiled at her and said, "It's time". Her only response was a silent, blank stare. "Now I show them what my fathers 'glorified wind up toys' can do."
His father would finally get vindication.
Top

I honestly hope it's a better plan than "take on the federal government", of course.

Canadian lighthouse to U.S. warship approaching it: This is a lighthouse; your call.
Top
Post Reply
19 posts • Page 1 of 1