Share and collect your fembot video and art ideas with our artists and video producing members.
Post Reply
3 posts • Page 1 of 1

[Who among you is Cinema Geek enough to recognize the source of my inspiration?
Complete spoilers here, beware!, but read to the end, if you haven't guessed the title.]

An ANALOGY:
Let's say this Model-T is a classic film of historic significance. The CONCEPT:
I want to hijack a classic high-art, short film from the 1940s. I want to use it as a template. The subjects of sex, death, dreams, doubles and identity are fundamentals already baked in. The structure is incredibly flexible, as one can swap out the symbolic objects in the original for any props appropriate for a fembot story.

Forget about a storyboard: the original film can be a guide illustrating many of the elements and objectives. Simple camera effects can be hard to verbalize, but easy to imitate. As in dreams, this physical space is malleable; she goes in a door, but the next shot shows she is exiting a window. The original features a simple music track, but is otherwise silent.

I dove into writing an adaption for two ladies of similar size and skin tone. I almost see the full skeleton from which multiple, very different custom scripts could be written, suiting any tastes.

To wantonly butcher a quote about the film from Wikipedia,

the symbolic picturization of [the fembot's "subconscious"] suggest that the subjective camera can explore subtleties hitherto unimaginable as film content. As the new technique can clearly express almost any facet of everyday human experience, its development should presage a new type of psychological film in which the camera will reveal the [fembot "mind"], not superficially, but honestly in terms of image and sound.

Once you grasp the formula, the possibilities are as fluid as filing in Mad Libs. All nouns and verbs below are subject to change. There are only some wrong answers! (I can't say there are no wrong answers).

The STORY:
A fembot "sleeper" walks along a path, finds a wind-up toy robot or woman, enters her apartment with her key, looks around and sees some basic props which don't seem out of place, goes upstairs to the bedroom, looks at the shower, then back down to take a nap in the living room (placing her cell phone, on mute, on a table next to her). Outside the window, once again we see she is returning home - events begin to repeat.

There is a mysterious figure far ahead of her on the path outside, then fembot "sleeper" v.2 enters her home, and now various props are in different locations. She goes upstairs (if we have stairs to work with) once more, and symbolic props imply unseen events and relationships. Her p.o.v. floats back to the front room, like a balloon on the ceiling, and sees herself sleeping in the chair, touching herself. The phone is lighting up, and with split screen we see v.2 pick up the phone, and listen. With the phone at her ear, saying nothing, she moves away from her sleeping self to the window, so the dream can begin once again with her on the path.

Enter fembot "sleeper" v.3, except upon entering, there is no napping v.1 in the chair by the window. She sees and follows the mysterious figure up the stairs. Again, props have been re-arranged. Once in the bedroom, the figure turns to show the classic bionic woman-style fembot face, then POP the figure vanishes. v.3 raises the phone to her ear, listens then still holding the phone to her ear, she walks into the shower and turns to close the door behind her. Walking as if it was a natural continuation of her previous motion "through" the shower, v.3 still holding the phone (possibly with opposite hand), returns to see herself again v.1 napping/touching herself. Looking out the window, we see the start of what will be the final, climactic loop.

On the road, v.4 chases after the mysterious figure (who is pretty clearly her or nearly her), but then just gives up abruptly and goes inside. Upon opening the front door, she is then exiting the shower (hints of a maintenance alcove). In the bedroom, two of her are lying on the bed. (some shots are split screen, some are with a body double with a wig). They make out, and with green screen cloth to disappear limbs, some dis-assembly occurs. Perhaps very slowed down or sped up flashes, highlights of their session (following a very basic build towards climax and post-malfunction afterglow).

v.4 joins the two at the side of the bed, and they pass each other objects across the bed-sheet, close-up on the hands, but never two of her at the same time in the shot. An object placed between them might POP into being something else, or re-appear once taken so another hand can take that one. Something becomes the phone, a humming vibrator on the bed becomes a raygun (robot conversion weapon), which v.4 takes. v.4 rises with her raygun in her left hand, and the phone in her right, raising it like she's about to speak. We don't see her doing it, but she whispers into the phone, "Give me your smile."

v.4 sets a few close-up, individual, purposeful footsteps on distinct outdoor surfaces, as v.4 approaches v.1 still napping, and fires the beam (how about the old-style, slow moving white line segment phaser burst). Whatever effect could obliterate her, or automate her, but it's very quiet. The next shot is only her lover, looking down over her like nothing happened. v.1 reaches out her arms to be pulled up, but expressionless. The other woman pulls v.1 up, and we watch through v.1's p.o.v. at the other woman, as we follow her to the bedroom. v.1 lies down upon a laid-out set of lingerie, then dissolve slowly into the same shot but she is wearing the outfit. The lover sits on the edge, and reaches down to touch close-up on her various parts. v.1 picks up an Apple remote and points it at her friend, who freezes then the image shatters (or some effect).

Now the lover walks the path as the primary fembot had before. The lover finds the wind-up toy by the front door, on its side but still walking. She takes out her key, and upon entering finds the primary fembot awaiting to greet her as the idealized, scantily-dressed Stepford housewife. With a beatific smile the housewife embraces her lover, then steps back so that she can present herself, turn around and show off all her beauty which the lover will soon enjoy.

Now I invite you to watch the sublime source of my inspiration,
Meshes of the Afternoon by Maya Deren and Alexander Hamid (1943).

I like this one. I think it's a really cool idea to go for a more cerebral and artistic take on a fembot video, one that retains definite fembot elements, of course.
Look what I did!
Top

I thought it would be simple enough to locate a sexyish wind-up doll, but I'm surprised at how difficult that is. Google Images will bring up plenty of adult costumes, or non-sexy wind-up toys.

This isn't sexy, and it's not even a real product (from a commercial). 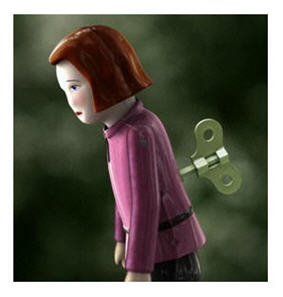 Does anyone know a better example, or a way to search?

but it's a bit too much, too soon in the video, to use a robot wind-up.

Return to “Video and Art Ideas”